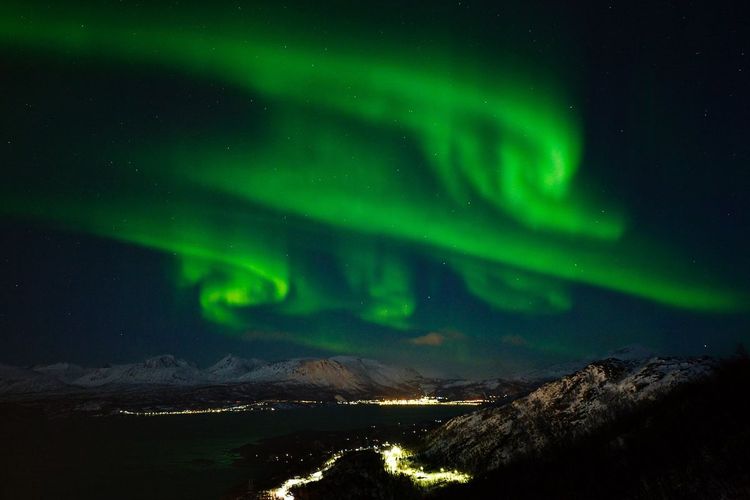 Aurora is an unpredictable lady, and you never know when she will decide to turn up. This diva keeps you waiting, so whenever you go hunting for the northern lights above the Arctic Circle, make sure you set aside the whole evening. Northern lights worshippers do everything from cross-country skiing to building snowmen in order to keep warm and entertained while outside.

However, organised tours are a good alternative.

When to see the northern lights

Seeing the northern lights, or the aurora borealis, as they are also known, is a jaw-dropping and mystical moment.

The lights are at their most frequent in late autumn and winter/early spring. Between the autumn equinox and spring equinox (21 September - 21 March), it is dark between 6 pm and 1 am, and you have maximum chances of spotting the lights.

From December there is normally plenty of snow. If you come in December or January, you experience the polar nights with atmospheric evenings and very short days. In February and March the days are longer and you see more of the snow-clad landscapes during daytime, and the evenings still offer maximum chances to spot the northern lights.

No guarantee can be given, though. Some weeks, you are treated to fantastic displays, repeated several times during the evening. Other times, the snow falls densely, or the northern lights simply stay away. Naturally, the longer you stay and the more time you set aside, the better the odds.

What are the northern lights?

The aurora borealis has been fascinating travellers to Norway and locals alike for generations, but what is the science behind the northern lights?

Each appearance of the northern lights is unique. Often you see three green bands across the night sky. Or the lights come as flickering curtains or rollingsmoke. The colour is a luminous green, often with a hint of pink along the edge, and occasionally with a deep violet centre. The colour palette seems to come from the 1980s.

If there is a lot of activity up there, the northern lights explode for a minute or two in a corona. The next minute it is all over, and you ask yourself whether this was real or just an Arctic fata morgana.

The science behind the northern lights

But what exactly are the northern lights? It is the sun that lies behind the formation of the auroras. During large solar explosions and flares, huge quantities of particles are thrown out of the sun and into deep space.

When the particles meet the Earth's magnetic shield, they are led towards a circle around the magnetic North Pole, where they interact with the upper layers of the atmosphere. The energy which is then released is the northern lights. All this happens approximately 100 kilometres above our heads.

Perhaps not so surprisingly, the northern lights' spectacle has given rise to as many legends as there have been people watching. Symbols linked to the northern lights are found on the Sami shamanistic drum. The phenomenon has several different names in Sami. It is, for instance, known as Guovssahas. And during the Viking Age, the northern lights were said to be the armour of the Valkyrie warrior virgins, shedding a strange flickering light.